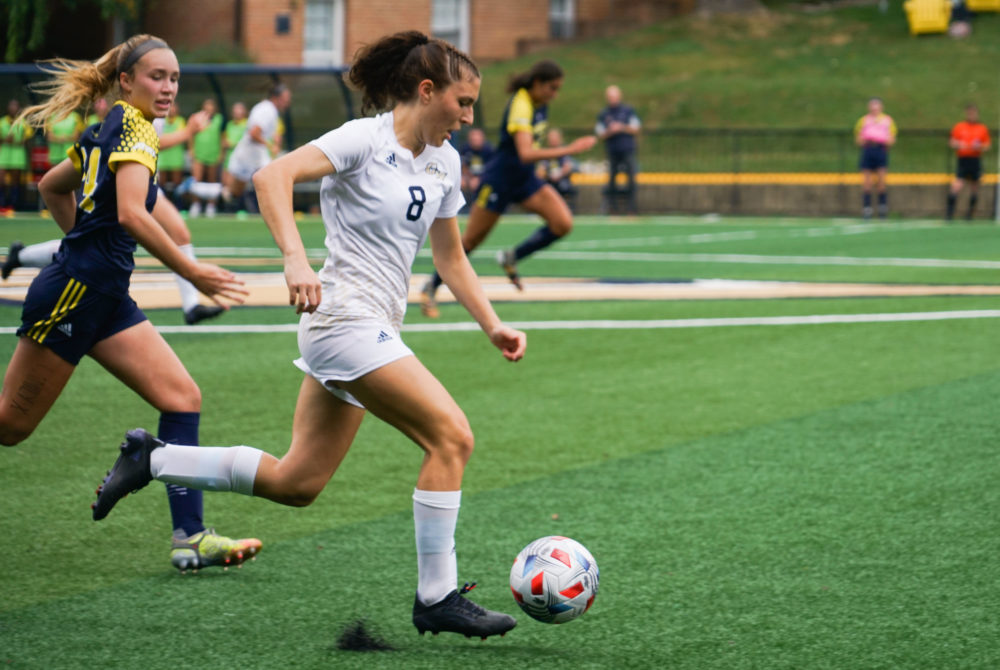 Junior forward Lauren Prentice turned the game and scored the Colonials’ only goal 18 seconds into the second half from an assist by defense attorney Cammie Dopke.

A 2-1 loss to La Salle broke GW’s unbeaten streak with its first conference loss on Thursday after the Colonials managed to fend off their first two Atlantic 10 rivals with ties as the regular season heats up on the road.

The Colonials (3-1-5) suffered their first loss of the season on the road in Philadelphia after a series of errors that propelled the Explorers (6-4) to their first A-10 win of the season. GW scored an early second-half goal after a slow first half, but the Colonials couldn’t keep the momentum and conceded two goals from defensive errors, including an own goal that snuffed out the team’s only lead.

The Colonials shot to a .063 clip with 10 shots on goal all game, with defense making the difference for both teams. GW passed La Salle with a season-high 16 attempts, but the Colonials could only find the net once, despite scoring their third game of the season on double-digit shots on goal.

The game started sluggishly with a strong defense that prevented both teams from scoring. GW freshman goaltender Grace Crowe accumulated two saves in the first half en route to a career-high six saves throughout the game, taking her season total to 17 with a 0.773 percent save.

The first half remained scoreless as both teams battled each other and racked up 10 combined fouls as the tight defense turned to more aggressive play to prevent a goal early in the game. The Colonials failed to stay in the opposing zone in the first half due to La Salle’s rigid defense.

GW picked up some momentum at the top end of the half, firing five shots but not putting them past goalkeeper Michaela Auguadro. As the pace tightened with a 0-0 draw, GW’s junior defender Margaret Rabbitt received a yellow card after a failed tackle.

Junior forward Lauren Prentice turned the game and scored the Colonials’ only goal 18 seconds into the second half from an assist by defense attorney Cammie Dopke. Prentice’s second goal of the season brought her shot average to .286.

A GW own goal ended the game in the 77th minute, aiding a struggling offensive from La Salle who were yet to find the net on their own. La Salle second forward Haley Gschrey led an attack on the GW net when she smacked the ball towards a Colonials defender who accidentally deflected it for a goal as he tried to guard the zone.

GW’s losing streak was to haunt them again five minutes later in the 82nd minute when the defense rushed to defend the left flank and kept the area wide open for a La Salle assist for Gschrey, which she tapped for her third goal of the season. The score put the Explorers in the lead, 2-1.

The Colonials couldn’t turn it over in the final eight minutes of the game, meaning their first loss of the season that broke an eight-game unbeaten streak.

GW will travel to Dayton where they will take on the Flyers looking for their first conference win on Thursday. Kick-off is scheduled for 7 p.m

This article appeared in the September 26, 2022 issue of Hatchet.