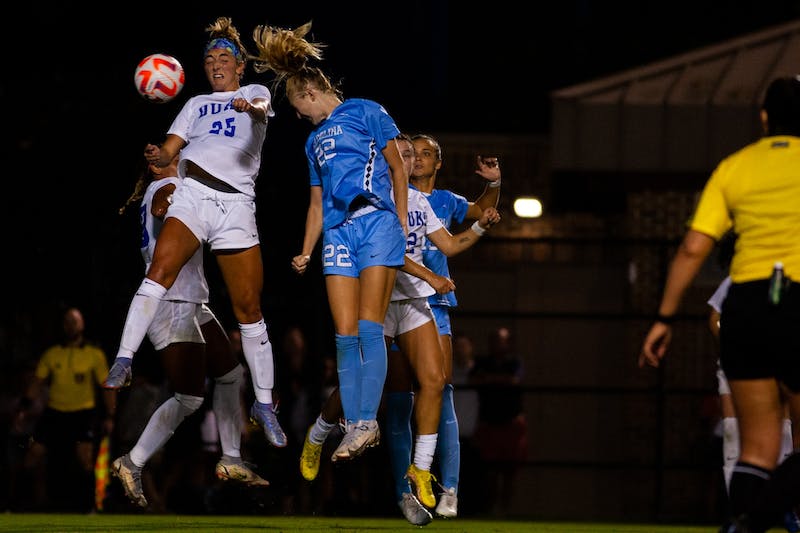 It was only the 35th minute but the North Carolina women’s soccer team celebrated like the game was decided when senior defenseman Tori Hansen scored the opening goal in Thursday’s 3-0 win over Duke.

On UNC’s first corner kick of the game, Hansen tracked down a well-placed ball off senior Emily Moxley’s right foot. She weaved through a crowd of Blue Devils and overcame Duke midfielder Nicky Chico to head the ball into the left side of the net.

It was a bold statement for the Tar Heels, who had already picked up two yellow cards in the dismal rivalry encounter.

“I loved it and hated it,” head coach Anson Dorrance said of his team’s excessive celebration.

Last season, UNC lost their first game at Dorrance Field to Duke. According to Hansen, the Tar Heels haunted the painful memories of the Blue Devils storming their home turf into Thursday night.

“Most of us on this team remember that feeling and I think that was such a fire among us for this game,” said Hansen. “We thought, ‘We’re going to do the same thing to them here in their field.'”

UNC didn’t just win. They dominated from start to finish and beat the Blue Devils 15-2. Not only did Hansen score that defining first goal, but she also mastered a defensive line that gave Duke his first shutout loss of the season.

In recent games, the defensive unit has been devastated by two season-ending knee injuries in starters Maycee Bell and Kayleigh Herr. But for every blow inflicted on UNC’s backline, another player rose to the challenge.

With Bell and Herr watching from the touchline in matching greaves, Hansen has become the de facto leader of the defence.

“We had people who were able to fill those roles without sacrificing[performance],” said Hansen.

Hansen played alongside senior Julia Dorsey as the team’s centre-back, while Moxley and first-year Tessa Dellarose flanked her on the right and left. For 90 minutes, this quartet formed an impenetrable wall that completely cut off Duke’s attack.

Moxley, who is officially listed as a forward in the team roster, impressed in her first start of the season at right-back, not only assisting Hansen but also stopping several of Duke’s plays in goal.

“She’s in insane shape. She can walk up and down the field,” said Emmie Allen, a redshirt freshman goaltender. “I think she was the best player on the field, probably in the first and second halves.”

Allen, who had shared time in goal with senior Marz Josephson until Thursday, played every 90 minutes against Duke. After conceding the goal with just one save, Allen credited the defense for giving her an easy game on her debut as the team’s full-time goaltender.

And with UNC being so effective at keeping the ball away from the Blue Devils, the Tar Heels scored their second and third goals by essentially wearing down their opponents. Dorrance set up rolling substitutions for his relentless front line, which pounded in a barrage of crosses from the right side of the field. When the clock ran out, two of those passes snuck past Duke defenders and into the net at the feet of sophomore Emily Murphy and older Isabel Cox.

However, as Dorrance pointed out, the foundation of UNC’s success begins with excellent defense. Thursday’s performance showed that the Tar Heels back row is driven more by group synergy than individual star performances.

“This is basically a demonstration of who we are at our best,” Dorrance said.

Sign up for our email newsletters to receive the day’s news and headlines in your inbox each morning.