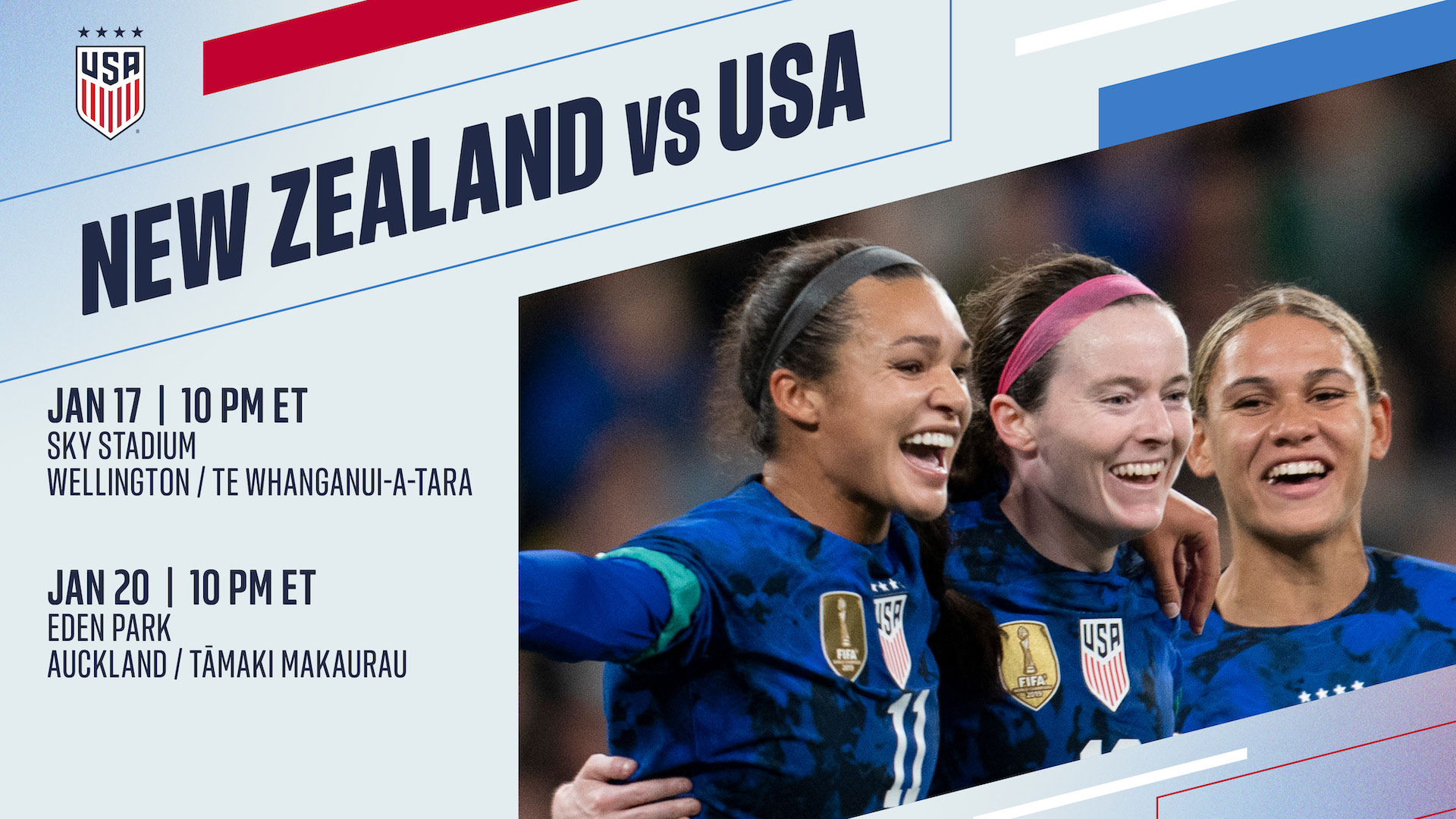 CHICAGO (November 2, 2022) – US Women’s National Team head coach Vlatko Andonovski will host the USA’s BioSteel training camp in New Zealand in January and it will be crowned by two games against the Football Ferns, co-hosts of the FIFA Women’s World Cup 2023.

These are the first-ever games in New Zealand for the US women’s national team.

The USWNT will train in New Zealand for six days before taking on the Ferns at Sky Stadium in Wellington/Te Whanganui-a-Tara on January 18. The game will kick off at 4:00 p.m. local time, which will be 10:00 p.m. ET on January 17 in the United States. The teams will meet again at Eden Park in Auckland / Tāmaki Makaurau on January 21st, also on site at 4pm, which will be 10pm ET on January 20th in the US. With a new broadcast partner coming on board with US Soccer in 2023, Warner Bros. Discovery Sports will exclusively present these games, with specific distribution plans to be announced at a later date.

The trip gives the US players a rare opportunity to play full international matches at the venues that will host all three USWNT group matches at the FIFA Women’s World Cup 2023 just six months later.

On October 22, the USA were placed in Group E in the Women’s World Cup final draw in Auckland/Tāmaki Makaurau, meaning they would play Vietnam on July 22 at Eden Park, with the Netherlands on July 27 on Sky Stadium and Group A playoff winners back at Eden Park on August 1st.

“Everything about this trip is positive for our team ahead of the World Cup,” said Andonovski. “We will get

some nice practice times together and two tough games against a great opponent hosting the World Cup. Also, we experience the long journey and get to know the host cities, the stadiums, the training grounds and the culture and hopefully we will play in front of a big crowd and support the home team. This will be a great start to the new year.”

Eden Park, which seats almost 50,000 fans, is New Zealand’s national stadium and has hosted many important sporting events throughout the country’s history. The original sports field on the site opened 122 years ago in 1900. Eden Park will also host the opening match of the FIFA Women’s World Cup 2023 when New Zealand take on Norway on July 20.

This match against USA at Eden Park will be the first-ever at this venue for the New Zealand women’s national team, who historically have had players around the world and have been able to play at home at times. The game at Sky Stadium, which will seat 34,500 fans for the World Cup when it becomes known as the Wellington Regional Stadium due to sponsorship regulations, will be the Ferns’ first at the venue since 2018. Tickets for both games will go on sale 11/16.

New Zealand’s hosting of the FIFA Women’s World Cup 2023 will cap a remarkable and inspiring trifecta in women’s sport over 17 months, as the country hosted the Women’s Cricket World Cup in Spring 2022 and is currently hosting the Women’s Rugby World Cup. Both tournaments featured matches at Eden Park.

Grace Women’s Soccer Jumps to No. 18 in NAIA