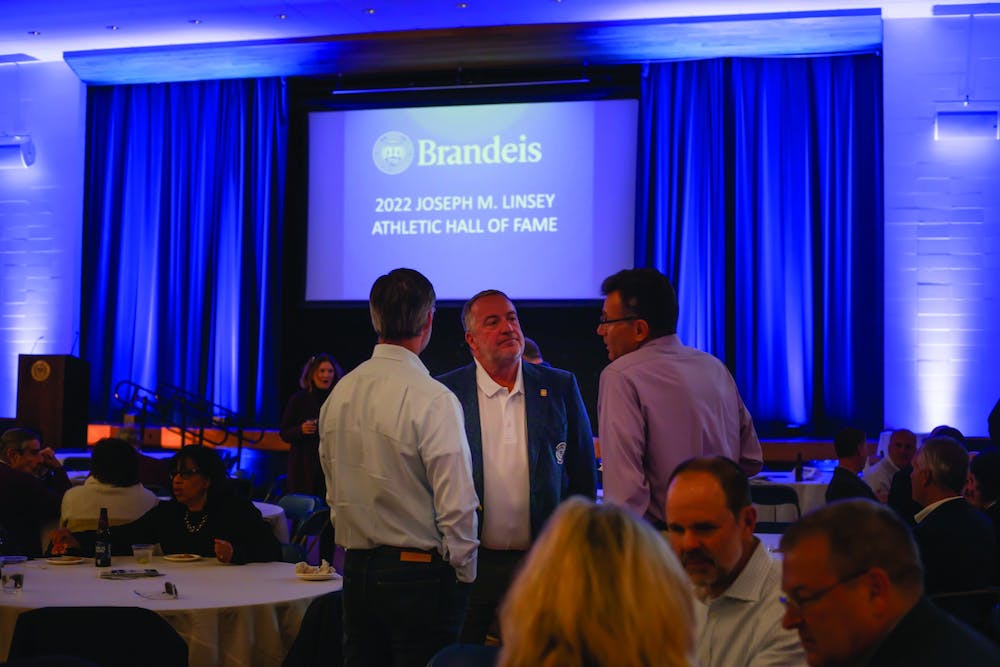 The weekend of October 7th and 8th was filled with several events featuring alumni and notable coaches from Brandeis Athletics past. In addition to the main ceremony, there were various alumni events ranging from a 5K run to a swim meet with a competition between the teams. The men’s and women’s college football teams competed against Carnegie Mellon University in their annual homecoming games. There were food trucks, a petting zoo, bouncy castles and more. This year’s Brandeis Homecoming was particularly notable for honoring four veteran coaches.

As the first-ever women’s collegiate soccer coach, Denise Dallamora’s impact is still felt today through the program’s success. It was only five years into their careers that the Judges had their first winning season, and by 1988 they had three All-Americans on the list. 2016 saw the Judges make their first Final Four appearance, with several appearances in the tournament in previous years. Between 2003 and 2019, they made it to the postseason 15 times. Dallamora was named National Collegiate Athletic Association Division III Coach of the Year for her Final Four run in 2016. Current coach Mary Shimko ’14 succeeded her after being her assistant coach and continued Dallamora’s legacy and impact. Following her integral role in founding the current women’s soccer program, Dallamora was honored after 40 seasons in the Brandeis Hall of Fame.

Looking for an opportunity to build a program at Brandeis, former men’s soccer head coach Mike Coven has won a straight season in his first two years as coach. In 1976, the team won the NCAA Division III soccer championship with All-American Cleveland Lewis ’79 on top. In terms of wins, Coven ranks sixth all-time in Division III and 10th overall for the NCAA. He led his team into the postseason in 25 of his 44 seasons, and in his last season, 2016, Coven returned to the Final Four for the first time in 32 years. He was named New England Division III Coach of the Year in 2012 and 2015 and named University Athletics Association Coach of the Year in 2002. These awards led to his receiving the highest honor in Brandeis Athletics with induction into the Hall of Fame.

Former baseball coach Pete Varney retired in 2015 after 34 years as the team’s coach and to this day has had a great career. He won more games than any other coach in Brandeis history and finished his career with a record of 705-528-6. His 700th career win made him the fourth Division III coach in New England history to reach that milestone. The current coach, Derek Carlson ’91, himself played under coach Varney and succeeded him when Varney retired. He was a three-time New England Division III Coach of the Year (’84, ’87, ’99) and coached three All-Americans and 12 pro players. These achievements, along with his championed work ethic, helped earn him his induction into the Hall of Fame this year.

Finally, Brandeis Fencing coach Bill Shipman’s 34-year career left his mark on Brandeis athletics when he helped promote a DIII fencing program that continues to compete against DI schools. In 1988, the women won their first UAA title and the men’s team beat the University of Pennsylvania in 1989, 14-13. The competitive spirit Shipman brought and the addition of the Gosman Athletic Center enabled Brandeis to host the 1994 NCAA Championships, as well as three other occasions (’99, ’04 and ’16). In 1994, Shipman was named United States Fencing Coaches Association National Coach of the Year. It’s no surprise that he was inducted into such a prestigious class in the Hall of Fame to honor his achievements.

Overall, the Hall of Fame ceremony and induction was a success for Brandeis Athletics. In addition, the department far exceeded its goal of raising $100,000 and had more than 50 donors, each contributing to seven programs. These legendary coaches helped usher in a new era in athletics at Brandeis, and their impact can still be seen today.