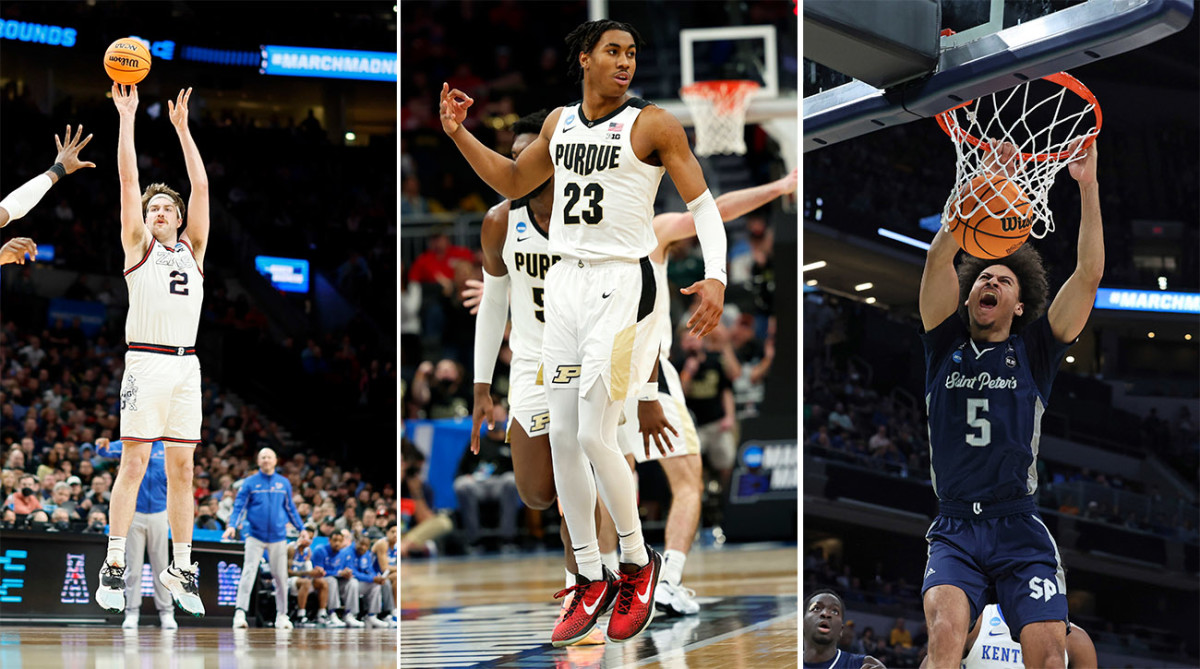 When Arizona survived a paltry game at 12:37 a.m. EDT Monday to finish the second round of the NCAA men’s basketball tournament, complete chaos was narrowly avoided. Had TCU been able to stir up excitement, this tournament would have nearly matched the record for unpredictability set back in 2021.

The seeding total for the remaining 16 teams in the Big Dance is 85. It could have been 93, surpassed only by last year’s 94. As it stands, the seed total is the third-highest in tournament history combined with 2018 and 2000.

Perhaps this is a two-year blip that means nothing major. After all, it was 2019 that produced the chalkiest Sweet 16 since the field expanded to 64 in 1985. But successive bracket blasting on this scale raises the question of whether we are in for a new level of unpredictability.

A No. 15 seed has made it into the Sweet 16 for the third time and Saint Peter’s rise could be the greatest Cinderella to come this far. The proud Peacocks are even less likely than Florida’s Gulf Coast in 2013 and Oral Roberts last year.

Three other double-digit seeds are still dancing — and while No. 11 Michigan, No. 11 Iowa State and No. 10 Miami lack midfield appeal, they’ve certainly been underdogs to get this far. The Wolverines were a controversial inclusion in the bracket, and neither weather disturbances (cyclones nor hurricanes) had blown up a major storm in weeks. The state of Iowa lost its only Big 12 tournament game by 31 points; Miami’s last regular season win over an NCAA tournament team was on January 26th.

Eighth Seed North Carolina is as blue-blooded as it gets. But the Tar Heels were not promised an NCAA bid until the final game of the regular season. Now they hold the distinction of being the first team of this tournament to put down a No. 1 set and defeat Baylor in a game that was both thrilling and exasperating.

But that hardly means the other three No. 1’s went into the second weekend. Arizona was life and death to beat the Horned Frogs in overtime, aided by a controversial no-call on TCU’s eventual possession of regulation. (So ​​many controversial calls and no-calls in the early rounds, but that’s another column for another time.) Gonzaga beat Memphis by four after being trailed about 15 straight minutes in the middle stages of the game. Kansas led Creighton by a single point in the final minute before winning by seven.

This is the first tournament since expanding to 64 teams in 1985 in which at least one No. 1 seeded player did not win their game by double digits in the second round.

As for seed #2? Well, they had their own trauma to deal with. Kentucky was impeached by the Peacocks as John Calipari has now officiated the worst season in school history (9-16) and the worst NCAA tournament loss in school history in consecutive years. Not only was Auburn beaten by No. 10 Miami, he was embarrassed. And for a while Sunday looked like Mike Krzyzewski’s last game against No. 7 Michigan State before the Blue Devils pulled away in the last minute.

Third-placed Tennessee got the better of Michigan in the last seven minutes. Wisconsin, the third seed, scored all 49 points in the loss to Iowa State. Texas Tech was behind No. 11 Notre Dame before a late 10-0 run propelled the Red Raiders into the third round.

At No. 4, UCLA, Illinois, Arkansas, and Providence won their first-round games against Akron, Chattanooga, Vermont, and South Dakota State by averaging 4.5 points. Beware of the mid-majors who have won 20+ regular season games; You will not go quietly in March.

As suspected with this tournament, there is no dramatic separation of the best from the rest. And the rest know it.

As reiterated last year and this year, college basketball’s competitiveness and diversity are its greatest advantages over college football. Nine conferences make up the Sweet 16, and no league has more than three teams (that would be the ACC, who are all stinking this year, and the Big 12, who everyone says is great). The West Coast Conference is here for the seventh year in a row thanks to Gonzaga alone. The Metro Atlantic made its first Sweet 16 since its inception in 1980 thanks to Saint Peter’s.

Meanwhile, the football kingpins are struggling. The Southeastern Conference may be towering over the gridiron, but it was reduced to rubble this tournament — five of its six teams left despite having a number of favorable seedings. The Big Ten is football’s other twin towers, but that league now only has a few programs dancing in Purdue and Michigan. The regular-season title winners in both conferences (Auburn and Wisconsin, Illinois) are gone. The winners of those league tournaments (Tennessee and Iowa) are gone too.

The diversity also extends to the coaches: seven of the remaining 16 have already been in the Final Four, three have won titles (Krzyzewski, Jay Wright, Bill Self). Gonzaga’s Mark Few, Houston’s Kelvin Sampson and UCLA’s Mick Cronin are all trying to make a repeat Final Four appearance. Miami’s Jim Larrañaga is looking for a second around 16 years after his first.

Nine trainers are trying to get there for the first time. That includes three fresh out of assistant coaching roles (Hubert Davis from North Carolina, Tommy Lloyd from Arizona and Mark Adams from Texas Tech) and another guy in his freshman season at a new school (TJ Otzelberger from upstate Iowa). That includes Matt Painter in his 14th NCAA tournament and 17th season at Purdue.

There is also a variety of styles, with a notable bias towards offensive ability versus defense. Eleven of the 16 teams rank higher on offense than defense on Ken Pomeroy’s metrics, and five of those are in the national top 10 (Gonzaga, Purdue, Duke, Arizona and Kansas). But there are still some vicious defensive teams in the field, starting with Texas Tech (No. 1 after Ken Pomeroy) and Iowa State.

Pace-wise, you have the Few Family Tree that loves to push the pace (Arizona and Gonzaga are #5 and #6 nationally for pace). They also have Villanova and Houston among the slowest 25 teams in the nation.

Who has the clearest path to a Final Four? That would be Purdue, where years of bad luck could finally tip the other way in March. The Boilermakers compete on St. Peter’s Friday and would play against either No. 4 UCLA or No. 8 North Carolina in the event of a win – a No. 15 who has never reached a regional final. For a program that hasn’t made the Final Four since 1980, the opportunity is golden.

The hardest way? That leaves Gonzaga, who should make the best draw as No. 1 overall. The West Region is the only one where the top four seeds have all survived, and the matchups are particularly challenging for the Zags: a super-sport Arkansas Thursday and then potentially either Texas Tech’s defensive knuckles or the Specter of Krzyzewski, who is on competed in more Final Fours than anyone in the history of the sport.

Who can actually win two more games – and end up with four more? The conjecture here is that just about anyone still playing has a shot, give or take at St. Peter’s and Iowa State (that offense, ugh). The flattening of the game, the travails of the top-rankers, and the massive increase in upsets over the past year and this suggest that almost anything is possible the rest of the way. Buckle up.

When is it safe to return to gaming after a concussion?