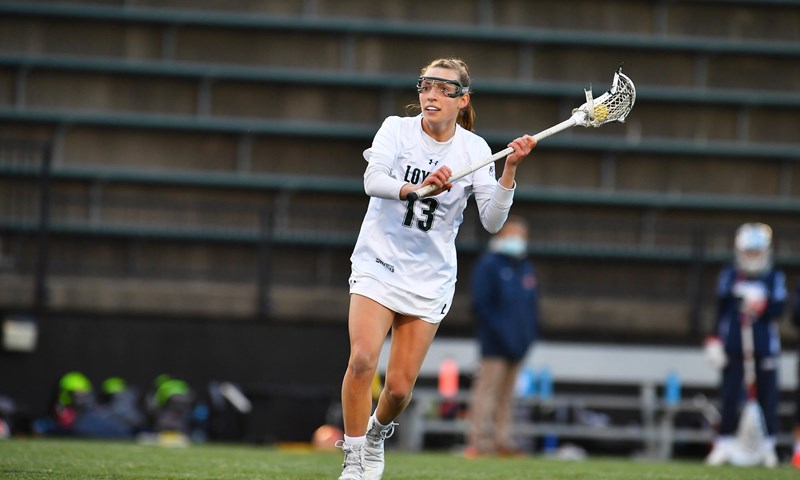 BETHLEHEM, Pa. – Lacrosse student Elli Kluegel of Loyola Maryland was named the 2022 Patriot League Female Scholar-Athlete of the Year following a vote conducted by the athletics communications staff of all member institutions of the league.

Kluegel is the eighth Patriot League student-athlete to receive a league-wide School-Athlete of the Year award in consecutive years.

The award is presented annually to one male and one male Patriot League athlete. Earlier this year, the nominees for the Scholar-Athlete of the Year honors were announced in their respective sports. For the 2021-22 academic year, there were 23 candidates from 24 Patriot League sports.

*Kluegel has a cumulative GPA of 4.0 as a graduate student while pursuing her Master of Arts in Emerging Media.
*A native of Fairfax, Virginia, after the 2022 season, earned second-straight-team All-Patriot League honors for the second straight year. She averaged 56 points with 48 goals and eight assists, led the Patriot League and ranked fifth in the NCAA DI in shooting average (.593).
*She was named IWLCA Scholar-Athlete of the Year and selected as a CoSIDA Academic All-American for a second time. Kluegel is also a three-time All-League Academic selection and two-time Female Lacrosse Student Athlete of the Year.
*The three-year captain had 182 points with 159 goals and 23 assists, in addition to 80 balls and 41 turnovers in a five-year career with the Greyhounds

During the 2022 season, Kluegel and the Greyhounds clinched the league title for the third consecutive year, finished sixth in the NCAA DI Women’s Lacrosse Championship, and advanced to the quarterfinals for the first time since 2015. In three tournament games, she scored one goal 10 goals with a .750 shot rate. The grad midfielder led Loyola Maryland to a 9-0 league record and helped break the NCAA DI women’s lacrosse mark for consecutive conference games won (66). Loyola Maryland made the field of the NCAA championship every time it took place during Kluegel’s career.

She continued to excel in teaching with a cumulative 4.0 GPA while studying emerging media at Loyola. Kluegel earned her Bachelor of Science in Biology with a minor in Innovation and Entrepreneurship in 2021, becoming the only Loyola Maryland athlete to graduate with a 4.0 GPA. She has also worked as an ambassador for BioNavigators, an organization aimed at introducing college students to career paths related to STEM.

To qualify for the Patriot League Scholar-Athlete of the Year award, a student-athlete must have at least a cumulative GPA of 3.20 and be a starter or key player in their sport. Freshmen are not eligible for this honor.

ABOUT THE PATRIOT LEAGUE

As the Patriot League enters its fourth decade of academic and athletic achievement, it continues to demonstrate that student athletes can excel in both academics and athletics without sacrificing high standards. The Patriot League’s athletic success is achieved while its member institutions remain committed to their founding principle of admitting and graduating student-athletes who are academically representative of their class. Participation in athletics at Patriot League institutions is considered an important part of a comprehensive education.