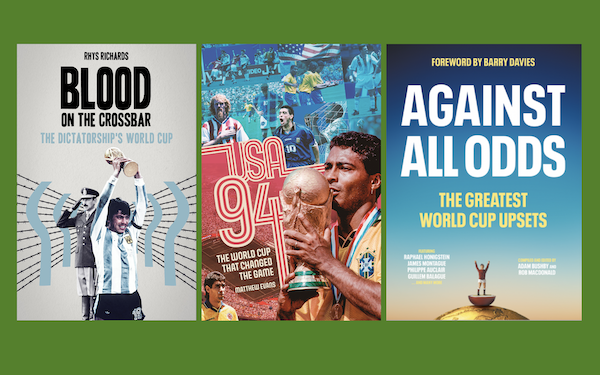 In the coming weeks, Ian Plenderleith will be reviewing a selection of the more interesting books published ahead of the 2022 World Cup.

• Blood on the bar: The world championship of dictatorship Through Rhys Richards (pitch)
• USA 94: The World Cup that changed the game Through Matthew Evans (pitch)
• Against all odds: The biggest surprises at the World Cupedited by Adam Bushby and Rob McDonald (halcyon)

“You don’t mix politics and sport. Otherwise you can’t play a match. There’s shit all over the world. If you boycott Argentina [1978]They must boycott Soviet Russia and Bulgaria.” These are the words of the Dutch midfielder Johann Neeskens, twice runners-up in the 1970s, and reflects very clearly the defensive stance of any player or football association asked about the ethics of playing at the 1978 World Cup. It was a tournament of magical but sometimes dirty football, also hosted by an unmagical military dictatorship responsible for the torture and deaths of around 30,000 political dissidents.

Despite his government’s brutality, Argentina’s triumph briefly brought the country together. Even in Navy School of Mechanics (ESMA) Torture Center in Buenos Aires, less than a mile from the Estadio Monumental, where the hosts defeated the Netherlands 3-1 in the final. “When Argentina scored, everyone – the oppressors, the oppressed, the prisoners and the torturers – greeted each other and looked at each other happily,” the former prisoner testified Adolfo Perez Ezquivel in Rhys Richards‘ Book blood on the crossbar, named after the campaign launched by Neerlands Hoop, a Dutch cabaret artist, who toured the Netherlands to get her country to boycott the tournament. However, the Argentine left-wing guerrilla Los Montoneros not only declared a ceasefire during the tournament, but also opposed a boycott, “knowing that in doing so they are fighting against the patriotic current in Argentina”. When the games started, the whole country supported the team, paradoxically coached by a socialist – the gruff chainsmoker Cesar Luis Menotti.

This is just a small selection of the quotes that form the background of what is probably the most controversial World Cup of all time (1934 in fascist Italy and 2022 in the authoritarian monarchy of Qatar are close). Richards does an excellent job of tackling the politics of that tournament that Neeskens was so keen to swear off, and describing the ambivalence of a football-obsessed nation at the heels of an unscrupulous, murderous government, but who at the same time wanted escape and facilitation of the sport to give him comfort and bring fame in the end. It would have been a classic of football literature if – ironically – it had stuck to politics and stayed away from what was happening on the pitch.

It’s not that the games, teams and players aren’t worth writing about. Of course they are an integral part of this story, but they must be treated as history, not as they happened this afternoon. So often books on tournaments feel compelled to describe every goal in detail, as if they hadn’t already been broadcast live millions of times, instantly transcribed by multiple media for recording, and weren’t now available at the click of a link. The writing shifts from clear analysis to the style of a tabloid hack working toward a midnight deadline, describing goals that are “finished with aplomb” and “happily dispatched” while stadiums “kettles,” “pressure cookers,” and “bear pits” feature a are “powder keg atmosphere.” The book also contains one of my favorite typos, as the Netherlands Dirk Nanninga succumbs to a “sick disciple moment” against Germany while demonstrating the dangers of using a spell checker instead of a professional proofreader.

However, if you’re a quick read of the match sections (or watch the online highlights instead), here’s half a brilliant book that not only takes the sport’s political allure head-on, but should also make us think about Let’s see Qatar 2022: Which country is fit to host a major sporting event and who is fit to rule world football (spoiler: it’s not FIFA)? 7/10

Another book that focuses on a single tournament is Matthew Evans‘ United States 94th, who begins by outlining what has changed between the Dire Italia 90 and its successor tournament, which has seen revenue increase across the board, as well as more attacking play on the field. “By offering three points for a win, it was hoped that teams would avoid playing it safe, while an adjustment to the offside law gave the attacker the advantage,” he writes. “The negative play that marred the 1990 World Cup brought the biggest change with the back pass rule, which is now commonplace but made its World Cup debut back then.”

There were player names on jerseys, flashy uniforms even for the referees, and of course it all took place in the USA, which was snobbishly viewed around the world as “not really a footballing nation”. Then the games started and most of us found that the modern, well-equipped stadiums were mostly full of fans who were more than invested in the outcome of the games and that it doesn’t really matter where you play the tournament – the markings, the goals and the rules are still the same. Spectators and visitors alike may have noticed that the USA has its own soccer culture and that the North American Soccer League was not just a novelty.

I loved the opening chapters which provided the context of the 1994 US bid to host after failing to win the tournament in 1986 (after Colombia withdrew and a savvy, well-connected Mexico tackling the messy US bid with muscles overtook). and the enthusiasm and huge crowds for football at the 1984 Olympics. The packed stadiums in LA and other football venues prompted a rethink at FIFA headquarters, where suddenly the thought of bulging coffers undermined the United States’ fitness for the Football showed even though they don’t have a consistent professional league. So much potential. So much cash.

Even after winning the bid to host the tournament, the USA suffered setbacks due to financial difficulties and the strained relationship between FIFA and the President of the US Football Association Werner Fricker. Germany was waiting in the wings to take over. then Alan Rothenberg defeated Fricker in the USSF presidential election, and his outspoken and innovative management put the tournament back on track.

Did USA 94 “change the game,” as the book’s subtitle suggests? Up to a point, no doubt, but the game evolves financially and tactically after each major tournament and after each adjustment to the “rules of the game”. The formation of the Premier League, the reform of the Champions League, the expansion of the MLS, the introduction of VAR – all this has changed and continues to change ‘the game’. While this book is highly recommended for US readers in particular, it would have been better to wait a few years to compare USA 94 to the upcoming 2026 tournament and refrain from detailed descriptions of games open to the public at the moment they are took place (see above). 6/10.

“Expectations in the US were so low they might have crawled under the covers,” he writes Harry Pearson in his essay on the USA-England game at the 1950 World Cup. You all know the score of that game, but that’s not what this book is about Against all odds, which focuses on the biggest upsets in World Cup history (declaration of interest – the book’s editor, Halcyon, also published my latest book). A pool of high-quality football authors – among them Tim Vickery, David winner, Rob Bagchi, James Montagu and Raphael Honigstein – focuses on games that have seriously shaken expectations and explores their broader context. Everyone is fascinated by the background to Argentina 78 in blood on the crossbarfor example will also enjoy Adam Bushby‘s comprehensive and entertaining breakdown of the only time West Germany played East Germany in the 1974 tournament. There’s little about the game itself, but plenty of insight into the Cold War and its impact on the lives of players who couldn’t ignore the political situation or traffic while attempting to cross a busy street.

It’s gratifying to read about games that you can remember seeing back then, but are shown here in a comprehensive new light – a bit like buying the deluxe box set version of an album that you have always loved. A conflicted, stubborn team from Northern Ireland defeated hosts Spain in 1982, Scotland’s late (too late) flourishing against the mighty Netherlands in Argentina, Cameroon’s nine-man narrow and very dirty win Diego Maradonareigning world champions to open Italia 90 and Senegal’s more stylish conquest of fading, fussy world champions France, who opened the Japan/Korea World Cup a dozen years later. Senegal’s striker El-Hadji Diouf was playing for French club Lens when the draw was made. “As soon as we saw France play Senegal,” he says in Philip Auclair‘s chapter “They [his teammates at Lens] Everyone got up and started making fun of me. That was it, they had already made up their minds – Senegal didn’t stand a chance.” If you love a bit of hubris (and who doesn’t?), this is the book for you.

Each game has its own story, but some are worth revisiting, as it just doesn’t seem believable that, for example, the people of Middlesbrough in England’s industrial north-east would have taken the burgeoning state of communist North Korea to their hearts in 1966 as it cheered on the misfits to beat Italy. What on earth was that? This book provides the answer and much more. 9/10.

Women’s Soccer: Huskies Take Victory at Senior Night; fail in the heartthrob of the Big East Tournament against St. John’s