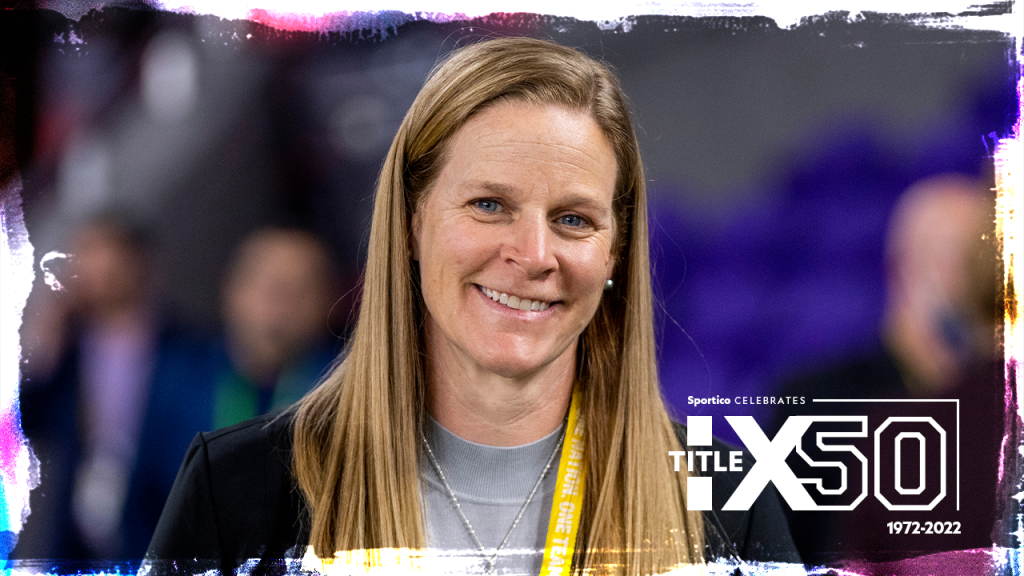 In this week, Sportico celebrates the 50th anniversary of Title IX with columns from top women’s sports leaders. Today’s guest columnist is Cindy Parlow Cone, President of the US Soccer Association. JohnWallStreet returns on Monday.

When I was 5 years old, my mother signed me up for ballet. I was excited. I flew down the stairs in my leotard. And my soccer shoes! My mother gave me a shocked look and explained that I couldn’t wear cleats to ballet. I protested that my brothers could wear cleats in all their activities. In the end we didn’t go to the ballet. Needless to say, my mother later understood that there was no world where cleats were not part of my wardrobe.

For as long as I can remember, sport has not only been a passion, but a matter of course in my life. Whether it was football, softball or basketball, if I wanted to play I could and I did. I saw the opportunities that the sport could offer – it gave me a college education, the opportunity to travel the world and compete in championships. I also understood that if I had been born just a generation earlier, I should not have been able to pursue my passion for the sport.

I am the person and leader I am today because I have the opportunity to play sports. Being able to ride the first wave of Title IX threw me into the deep end of what has been granted to men and boys since, well, forever. Having sports as a part of my early life led to a collegiate career at the University of North Carolina that catapulted me onto the national and international stage. Title IX allowed me to play my game all the way to the Olympics and World Championships.

The sometimes arduous journey of women’s football has benefited greatly from Title IX and the leading figures who have emerged as its torchbearers. Title IX kick-started women’s soccer in the United States through its impact on collegiate sport and helped lead the US women’s national team to four FIFA World Cup titles and four Olympic gold medals. I believe the success of our women’s national team has proven, both in this country and around the world, that women are always up to the challenge when given equal opportunity and investment.

Even after hanging up my shoes, I continue to use what I learned on and off the field, which ultimately furthered the skills needed for a coaching career and my current role as President of US Soccer .

In this role, I see the legacy of Title IX firsthand. I am forever indebted to the trailblazing women who fought for a reality they could never achieve on their own, and am inspired by the current generation of players and coaches who continue to push for progress and challenge us all, bigger and to think better.

I am proud that we are the first country in the world to work with our men’s and women’s national teams to fully align compensation, including World Cup prize money! Although it has taken us too long to get to this point, USWNT, USMNT and the US Football Association are all incredibly excited that we were able to come together and close this historic deal. While we will all remember this moment, what I look forward to most is the opportunities it will bring for the future. We are determined to invest in women’s football and this will generate more fan interest and sponsorship opportunities while spreading the important message of equality.

In addition to many successes, there are also reminders everywhere of how far we still have to go. I’ll feel like I’ve really arrived when things like equal pay and equal support for women and girls, not just in football, not just in the US, but around the world, are no longer a question. We will be successful if there is equal investment at youth, university, professional and international level.

Beyond sport, we must continue to work for equality in education, business and society. I hope that my 4 year old son and the rest of his generation will value people by what they bring to the field and not by their gender or any other identifier. After all, we all wear cleats.

Cindy Parlow Cone is the first female President of US Soccer, the second incumbent National Soccer Hall of Famer, and the first in that position to play for a senior US national team.