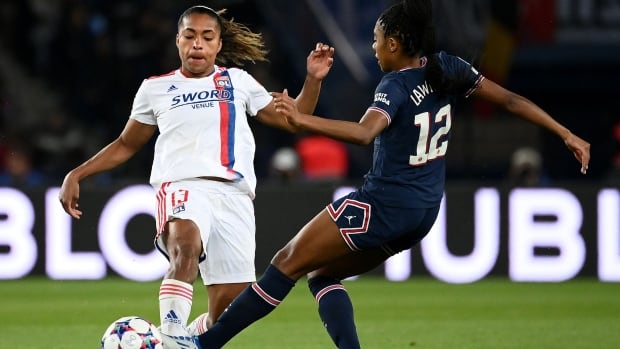 In an all-France draw, Lyon improved 5-3 on aggregate after winning the first leg 3-2 last week. The attendance of 43,255 fans set a record for a women’s football club game in the country.

The all-time top scorer in the competition, Lyon striker Ada Hegerberg, extended her record to 58.

After Hegerberg’s first header, PSG equalized in the second half through striker Marie-Antoinette Katoto.

Lyon captain Wendie Renard sealed the win by heading a free-kick into goal in the 83rd.

The rivalry between the two clubs was tense. PSG beat Lyon in 2021 Quarterfinals after Lyon beat PSG in 2020 Semifinals

Barcelona are advancing despite their 1st defeat this season

Defending champions Barcelona also advanced, albeit at the expense of their perfect season.

Barcelona lost the semi-final second leg in Germany 2-0 to Wolfsburg but prevailed 5-3 on aggregate.

The Spanish team had won every game in all competitions, including last week’s 5-1 first leg against Wolfsburg. Barcelona’s last defeat was in June 2021.

“It’s not easy to keep winning and winning. Perhaps the defeat comes at a good time because it didn’t stop us from reaching the final,” said Barcelona coach Jonatan Giraldez. “Today is about gaining experience for us. They played further up after the break, put us under pressure and we lost the ball too often.”

The defending champions meet seven-time champions Lyon in the final on May 21 in Turin, Italy.

Barcelona dominated the first half in Wolfsburg but lacked the finishing touches. Wolfsburg destroyed Barcelona’s aura of invincibility in the second half. Tabea Wassmuth scored her competition-leading 10th goal from distance in the 47th minute, level on points with Barcelona midfielder Alexia Putellas.

Midfielder Jill Roord doubled the lead in the 59th minute.

Barcelona are trying to repeat their treble from last season. Barcelona have already won the Spanish league and are in the semi-finals of the Copa de la Reina.

AFC Champions League 2022: When is it, how to watch, remaining teams, prize money, star players and previous ACL winners