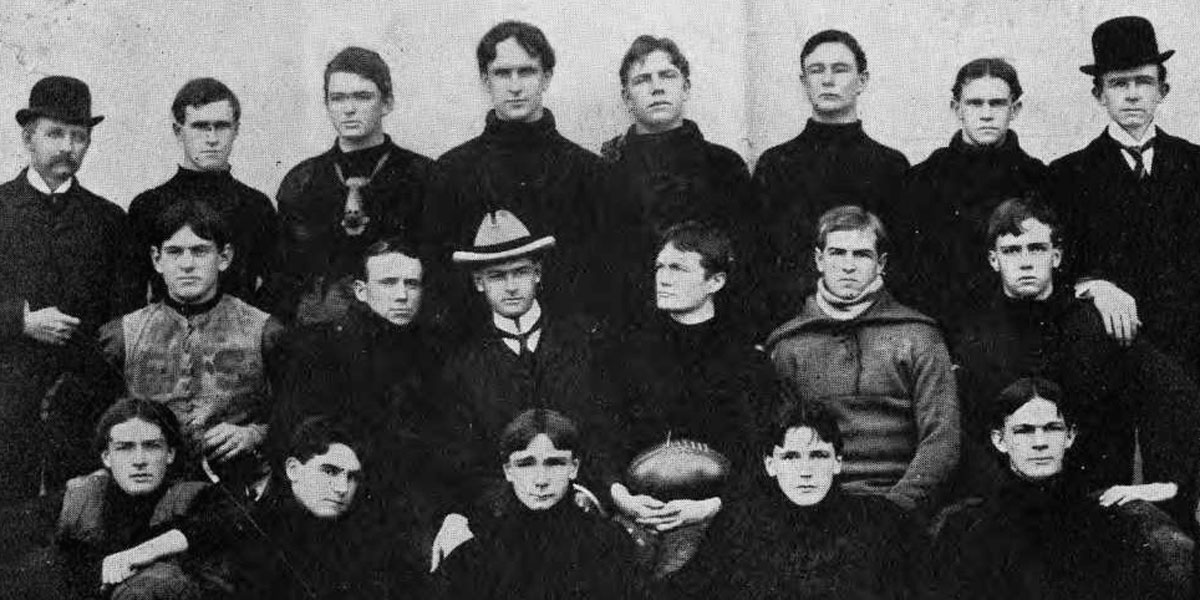 The History of American College Football: Institutional Politics, Culture, and Reform, edited by Christian Anderson and Amber Falluca, examines the role of popular American sport on college campuses from its 19th-century roots to its contemporary cultural dominance. Anderson is an Associate Professor in the College of Education’s Department of Educational Leadership and Policies. Falluca is Associate Director at the Center for Integrative and Experiential Learning and an instructor teaching a course on intercollegiate athletics and higher education. The two also co-curated an accompanying exhibition at the University’s Educational Museum at Wardlaw College.

Christian: College football made a lot of its 100th anniversary. They had a centennial game between Rutgers and Princeton playing what is widely believed to be the first college football game in 1869. They had a national homecoming queen. Then they had the game of the century between Texas and Arkansas. ABC Sports made them change the schedule because they assumed these two teams would end the season undefeated, and they were. President Nixon was in the stands presenting Texas with a plaque to name them national champions. That’s a part. It also just fell out like that. The chapters all happened to fall within those first 100 years, with the exception of the chapter on the NCAA versus Board of Regents decision in 1984. But even that didn’t just appear out of nowhere. The events of the last 30 years have shaped this decision.

They also emphasize myth-making. They write that “the mythology in college football is larger than life” and argue that we “need to understand the function and purpose of these myths.” What is this function – on our campus or in the larger culture?

Christian: We’re always trying to find meaning in our lives and football seems to fit that niche by helping us make sense of who we are and who we aren’t. We all seem to give up part of our identity to our football team in the fall. If your school is 12-0 or 10-2 or 6-6, it affects your vibe and your campus vibe and the vibe of your community. Basketball is huge, baseball is huge, they all have their own rhythms, but there’s just something about football.

Politics and history also run through. And some of it is eye-opening. A chapter explores the relationship between football, masculinity, and the lost cause in the post-Civil War South.

Amber: As I read this chapter in draft form, I kept asking myself, ‘How could I not already know these facts?’ An example is the name Ole Miss for the University of Mississippi. That’s what it’s commonly called. Ole Miss is still written on their uniforms, on their helmets, and you don’t think anything of it. Then you learn the story that the nickname came about with the school yearbook. When you unwrap this, you learn that the yearbook was a reference to the slavemaster’s wife or mistress.

So we have this sport where the student athletes are mostly African American males. It’s not a question in Division I, particularly within the Power Five conferences. They are members of the team and represent their school, but at the end of the day they wear this emblem. This is a fascinating societal conundrum, especially today. Given everything that’s happened with Black Lives Matter, why hasn’t that kicked in yet? Or will it come to fruition?

We already mentioned the NCAA. The penultimate chapter is about the Board of Regents v. NCAA, the 1984 Supreme Court case that opened the door to the commercialization of college sports.

Amber: The 1984 case speaks volumes for this opportunistic slice of college football with television. Who controls the income? Who will not only reap the rewards of monetization, but who will essentially have the power and influence? With the dominance of the NCAA, it really set an additional course — I’m not even going to say a new course, because there was already momentum.

There’s even an anecdote about the rule change banning the dangerous flying wedge formation, how the NCAA has maintained its own mythology on the subject — as you write, Christian, “to assert its indispensability.” Their schedule was wrong, they overstated their role, but whatever. They have affirmed their indispensability and they have not lost it.

Christian: Well, let me bring that back to the 1984 case. Byron White, Deputy Supreme Court Justice, had been a football player himself. Contrary to the majority decision, he talks about the history of intercollegiate sport. He says, look, we’re straying far from educational value. When we talk about student athletes, we’re really moving into something more akin to professional sports. Even if they had ruled differently in 1984, we most likely would have ended up somewhere close to where we are now. The forces were too great.
But this verdict really sped things up.

We started with the 100th anniversary of college football. We’re on our 150th. There’s a lot of discussion about those salaries, the big budgets and the sport is evolving. If there was a sequel, what would the chapters be?

Amber: I think what we’re going to see with some of the upcoming laws is that the student-athletes are the riders. You can’t ignore it So I think we’re going to see implications of Image and Likeness (NIL), good and bad. It’s a good opportunity for student-athletes to finally say, “You’re going to market me, I’m going to get a piece of the pie.” And I think that’s great. But what interests me is the dynamic that occurs within a team structure in a sport like football. Are there the haves and the have-nots? And how does that affect the pitch? Does it affect how the coach interacts with the players or how they recruit student athletes?

Christian: You know, the origins of college football were students playing against students, building it and organizing it. It was very student-run, almost intramural, except that it was intercollegiate. It wasn’t us playing a pick-up game on the Horseshoe. It was us that challenged Clemson, or even the YMCA and high schools in the early days. I mean, you look at some of those early plans and it’s crazy who they played against.

But then the faculties got involved in overseeing it, and some were even trainers. Then you saw the administrative takeover. Faculty still played a role, but their role diminished. Now we almost come full circle. We’ll never have student control like we did in the earliest days, but there’s more student influence, as Amber said. So I think if you wrote the 50+ years since 1969 you could devote half the book just to the student athlete. In fact, the term “student athlete” would be chapter one.

Share this story! Let friends on your social network know what you’re reading about